It’s time to introduce the newest member of the family.  We call it “The Saluminator.”  It’s a cousin to The Porkulator, our trailer barbecue.  The Saluminator is a drying chamber for salumi (Italian, and the likely inventors of such things as claimed by my Italian friends), or charcuterie (as it’s known by the French).  Either way, it is where cured meats go to age to perfection.

I suppose it was inevitable that The Saluminator would come to be.  I have been dabbling in meat curing for many years, starting with basic bacon and sausages.  Over the years I moved forward with cured and cold smoked sausages, duck breast prosciutto, and countless variations of bacon.

A drying chamber allows the meats to age to the point where they have lost enough moisture to become shelf stable.  Basically, you need a cabinet that can be kept clean of mold, bacteria, bugs, and dirt, and you need a way to hold it at about 55F and 70% humidity.

Enter my friend Jim, the same one who strongly suggested to me to build The Porkulator.  Some months ago he suggested we should build a drying chamber and go in cahoots on a salumi project.  Again, I tossed the idea aside.  Too many other things going on; too busy.  Yeah.

Time elapsed once again, and I started to think maybe it wasn’t such a bad idea after all.  I searched the on line auctions of used restaurant equipment, and settled on a small commercial fridge.  It is the type of fridge used to hold cold drinks in a gas station.  It is solid and built to run hard all the time and take a beating.  At the auction, I got it for less than 25% of the prices on the used equipment market.  Jim and I picked it up and moved it into his basement.

Jim picked up a thermostat controller to allow the fridge to be set to 55F.  He drilled a hole in the side and piped in a small humidifier.  A weather station tracks the inside temperature and humidity.  Still working out the kinks, but it’s simple and effective.    Jim put a small fan inside to circulate air and he put in a block of Himalayan salt to temper the humidity level.

The projects so far have been very successful.

Jim cured a whole pork belly for pancetta.  The belly is cured with salt, curing salt and spices, then is rinsed and dried and hung to age.  The meat is weighed at the beginning of the aging process, and it is tagged with the date and weight.  The meat is periodically weighed.  When it has lost sufficient weight, generally 30%, but a bit less for fatty cuts (like the belly), it is ready to eat.  It can be eaten without cooking, or can be used in any appropriate cooked dishes.  I foresee some Rigatoni All’Amatriciana made with this pancetta!

For my first Saluminator project, I made two simple items.

The first was a simple cooked ham.  I boned two pork butts and rubbed the meat with 400g sea salt, 50g smoked salt, and 18g pink salt. I let it cure in my home fridge for 6 days flipping the package every day.  Next, I rinsed it with wine, rubbed with some spices (black pepper, rosemary, and other Italian herbs), packed in netting, and then put it in the Saluminator for 3 weeks.  I them simmered the netted meat in water for two hours, changed the water and did two more hours.  I was going to smoke it, but it came out so good, we ate the first one as-is.  It’s good as a cold cut or cut more thickly and cooked like a slice of ham to go with breakfast.  Two butts made five netted pieces, so I still have more to play with.

My second project was Bresaola.  I have made Bresaola many times before.  I always made it in the winter when our brewery room is cool (unless beer is being brewed).  I make Bresaola with a top round or eye round of beef.  It is rubbed with a mixture of salt, curing salt, black pepper, herbs (including rosemary and juniper berries).  After two weeks of curing in the fridge, flipping each day, the meat is rinsed, netted and hung to dry.  I used to do this in the uncontrolled environment of our brewery, so The Saluminator brought some consistency to the process.

The Bresaola had lost 30% of its weight in about two weeks.  It was a fairly small piece.  It turned out a bit dry on the surface, so I vacuum packed the meat for a few days to equalize the moisture.  The result is fantastic.  I am going to make a lot of this.  In Spring, when my wild arugula patch takes off, I will live on salads of arugula, bresaola, shaved Parmagiano Reggiano, lemon juice, olive oil, and black pepper.  One of the best salads in the world! 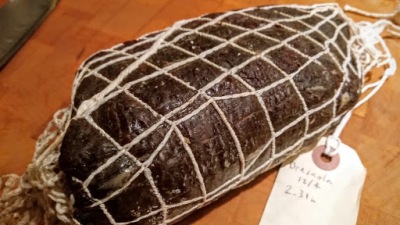 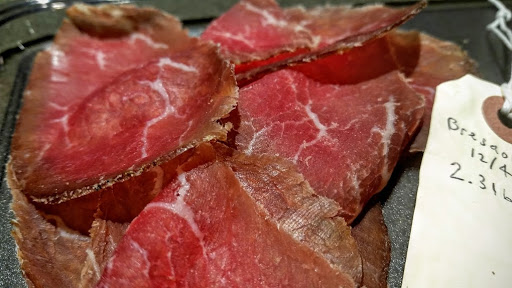 Next up was something a little more complex.  I wanted to make some homemade salamis to use as pizza toppings.  Jim was on board with this.  The nice thing about having a partner in a project is that not only do you get help, you can also make more things without ending up with too much of one thing.  We decided to make two simple salamis.  One is coarsely ground with a lot of fennel as the primary seasoning.  The other is more finely ground and includes a mixture of smoked (Porkulated, of course) red pepper flakes and hot Korean red pepper.  These two peppers work together beautifully to give a fresh and deep pepper flavor.  The bright freshness of the Korean pepper compliments the smoky goodness of the Porkulated peppers.  Both include garlic and ample black pepper. 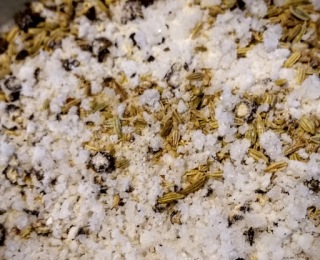 Normally salamis like this are stuffed into beef middles.  We decided to use large 46mm+ hog casings so the salamis would be a bit thinner.  Good for pizza, and good to speed the drying process.

Both salamis include a bacteria culture called Bactoferm.  The purpose of the bacteria is to ward off Botulism as well as to add a bit of twang to the salami.  The bacteria need to inoculate.  I put the freshly stuffed salamis on sheet pans and placed them in my convection oven with another sheet pan containing water and towels to humidify the oven.  The inoculation needs 12 hours at about 80F and 80% humidity.  My oven has a bread proofing setting that runs 100F, so I monitored the temperature and turned on the proofing feature every so often to hold 80F. 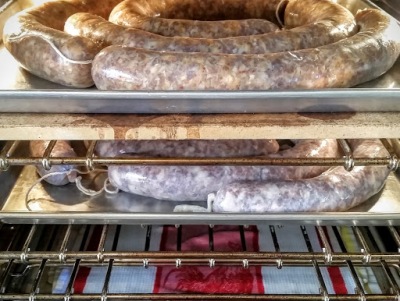 The next day, the salamis were hung in The Saluminator with care.  All there is to do now is weigh them every so often and track progress.  In about three weeks, we should be ready to taste!  I can’t wait! 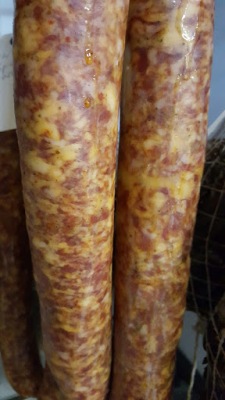 Expect to see more of The Saluminator here from time to time.  There will be lots of fun projects for sure!