Poutine is a glorious dish. A base of crisp French fries topped with gravy and cheese curds is the common version. Unhealthy, perhaps, but poutine can certainly be enjoyed infrequently and in moderation. Nah, who am I kidding? Dig in! 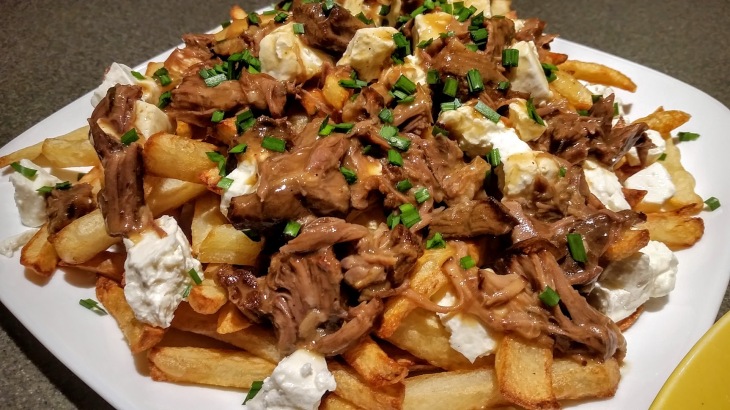 French fries were a mainstay in my childhood. We grew our own potatoes, Kennebecs and Yukon Gold, for making fries. We had a special French fry pot, and even a specially made burner on the electric stove just for the fryer. My mom would churn out batches of fries when we had them as part of certain meals, and we would stuff ourselves until we could eat no more. If there were leftovers, and I only recall that happening twice, one of us kids would be dispatched to the neighbors with the rest for them to eat while hot.

In later years, my dad, who was the gardener and a major potato lover, took over making the fries. He had his specific techniques for making them, and was proud to churn out perfection to the delight of all the happy eaters. He set up his own kitchen in the basement where he worked this French fry alchemy.

I took on the French fry mastery when I left home to attend university. We lived on the cheap, and my roommate and I were not ashamed to admit we lived on fries for an entire semester. Well, maybe fries and beer. We may have overused our oil a time or two, but the potatoes were right from my dad’s rich garden. We ate like kings. Fortunately, the university was on the side of a mountain, and we got plenty of walking to burn off the carbs.

I don’t recall the first time I ate poutine. Chances are it wasn’t memorable. Many poutines suffer from sogginess, bland gravy, and poor substitutes for cheese curds. Made right, however, poutine is food of the gods.

I made poutine at home and had poutine many times in restaurants. Good, even great, poutine. I raised the bar, and determined to make poutine perfection.

I felt pretty comfortable with my French fry capabilities, so I set that aside for now. More to come on that later in this post.

I started on the gravy. I wanted beef, braised beef, very rich, but bright to provide some accent to the dish. An unctuous bridge between the fries and the curds. Easy choice: oxtail or short ribs. I chose oxtails because I just love cooking them and they exude rich beefiness. 2-3 pounds of oxtails will do the trick. Make the gravy a day ahead of the poutine.

I start by seasoning the oxtails, and then searing them in a cast iron Dutch oven until they are nicely brown on all sides. Toss in 2 peeled carrots cut in pieces, 2 stalks celery (with leaves) cut in pieces, 2 onions peeled and quartered, a handful of peeled garlic, 4 peeled whole Roma or San Marzano plum tomatoes (for acidity), parsley, thyme, and a few fresh bay leaves. (I learned a little trick for releasing nice bay flavor is to rub the leaves with a little oil and then microwave them for 10-15 seconds, just until they release aroma.)

Stir the pot around to coat everything with the juices, and then add a 750ml bottle of beer. I am partial to using a strong Belgian-style dark ale (I used a homebrew), but you can choose one you like. My advice is to use a beer that is not highly hopped as hops will detract from the flavor I like to develop in the gravy.

Bring the pot to a good simmer, and then cover and reduce the heat. Cook until the oxtails are fork tender, meaning their meat can be shredded very easily. This can be done using a sous vide device, but I like the caramelization which develops in the braising pot.

When the oxtails are tender, fish them out into a bowl to cool slightly. Fish out the bay leaves, too. Discard the leaves. Cook the juices and vegetables in the pot until they are well reduced. Use a stick blender to blitz into a gravy. If needed, whisk in some corn starch and bring back to a boil to thicken as desired. You don’t want it too thick, but is should not be watery either. Taste and adjust the salt and pepper.

Separate the meat from the oxtails, leaving some bite sized pieces. Stir these into the gravy, and allow it to cool. Store overnight in the fridge.

If you are lucky enough to live in Wisconsin, you can just go buy cheese curds at the store. I live in Virginia, and no one knows what a cheese curd is here. I have to make my own. It’s pretty easy though.

Cheese curds decline in quality from the day they are made, so I like to make them fresh. You will need high quality milk (1/2 gallon makes enough curds for two large batches of poutine), cheese culture (I find that mesophilic or thermophilic work about the same here), calcium chloride (some may argue this is not needed, but I like a firmer texture to the curds), rennet, and salt.

A sous vide device makes making cheese curds a breeze. Put the milk in a 4 quart container. Fill a container of water for the sous vide so that the container of milk will fit in it where the milk is equal to or lower than the water level. Too much water and the milk will try to tip over, so just enough water where the container of milk is stable in the water bath. Using the sous vide, heat the water to 96F. Place the container of milk in the water bath and allow to ripen for 60-90 minutes. Stir 1/4t CaCl2 and 1/4t culture into 1/4c cool unchlorinated water. Add to the milk, stir well in circles and top to bottom. Let the milk rest in the 96F water bath for 60 minutes. Add 1/4 to 1/2t liquid rennet to 1/4 cup cool unchlorinated water. Add the rennet to the milk. Maintain 96F. After 30-60 minutes, curd will form. The mixture will have the texture of thick yogurt.

Cut the curd in 1″ (2.5cm) pieces. Cut vertically in a cross hatch, then on a 45 degree angle in all directions to make sure the curd is evenly cut. Continue to hold the 96F temperature until the whey appears clear and pale yellow.

Turn the sous vide up to 116F and set a timer for 2 hours. After 2 hours, the curds will be cooked and hold shape. Pour the curds and whey into a cheese cloth lined colander. Gather up the corners of the cheese cloth and squeeze out as much whey as you can. Place the gathered up cloth containing the curds back in the colander. put a plate on top of them, and then rest a gallon jug of liquid on top of the plate to press out the rest of the whey. In 2-3 hours, separate the curds lightly salt them and place in a bag. store in the fridge until ready. You may need to sample a few because they are so good at this point!

A research paper, entitled Gelatinization Temperature Of Potato Starch At Equilibrium State, came across my desk from a journal called Agricultural and Biological Chemistry. The study was done at the University of Osaka Prefecture in Japan. My takeaway from the paper was that holding potatoes at 152F for an hour would result in 100% gelatinization of the starch.

My thought was that if I could do this without breaking down the potatoes, then I may have a fool proof way to make perfect fries. I conducted three experiments. All put the potatoes in a vacuum and processed them for 60 minutes in the sous vide water bath at 152F. All used fresh crop russet potatoes from Prince Edward Island, Canada.

Experiment number 1 was to make a 5% salt brine and add potato starch to it. Pour the brine into the pouches of potatoes, seal and process in the 152F water bath. My thought was the brine would evenly distribute salt and starch to the potatoes. The added starch would create nucleation points for the gelatinization process, and would aid in the browning or Maillard reaction of crisping during the frying step. These fries had excellent crunch, but they were dense in the middle. I suspect the added water in the brine did not permit the potatoes to release sufficient moisture. The moisture in the potatoes was trapped and then sealed in by the frying.

Experiment number 2, I spread the cut fries on a sheet pan and lightly dusted them with potato starch on all sides. I sprinkled a light amount of salt over them, packaged, sealed, and gave them the 152F treatment for an hour. Upon removing from the water bath, I chilled the potatoes to stop any further cooking of the potato. I wanted to retain the crisp exterior of experiment number 1, but improve the internal texture of the fries. These potatoes came out of the pouch all stuck together. I mostly separated them, and fried. The ones I did not separate still stuck together in the fryer. That was a minor detraction, and I am pretty sure it was due to the chilling step. These fries were excellent! Golden and crunchy on the outside, and light and fluffy inside. Great potato flavor. Eureka! 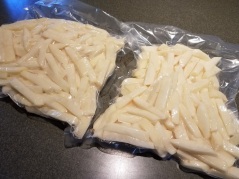 Just for good measure, I did one last experiment, number 3, this time with no potato starch and no chilling. Just potatoes and salt in the pouches. These fries had excellent quality, but the surface softened as soon as they cooled or were hit with gravy. These fries looked the best, and they were more than acceptable to my fry laden palate, but experiment 2 was the clear winner.

No one minded that the Experiment 2 fries stuck together a bit, but I know how to fix that, so I consider my work here to be done for the time being. I shared my initial results with others who were full of other variables and things they had heard, but as far as I’m concerned, this case is closed.  I had the fries I needed for my ultimate poutine.

Then it was just a simple matter of putting the fries on the plate, drizzling the succulent gravy over top, making sure to distribute the morsels of oxtail meat, and distributing cheese curds on top. A bit more gravy to slightly melt the cheese, and then chives or sliced garden jalapeno chiles to garnish. 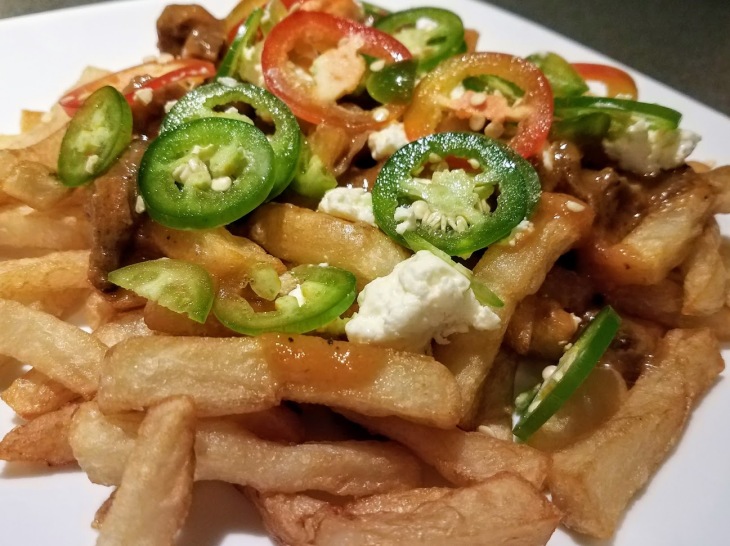