This recipe is for those folks who dream of a barrel full of pickles in the basement. A barrel you can visit anytime, lift the lid, reach below the brine, and pull out a delicious whole fermented cucumber.

My mother and grandmother made a pickle they called a 14-day pickle, where small cucumbers (gherkins) were aged over a period of two weeks with spices and brine. They were sweet, not really to my taste, but the process and the transformation of the cucumbers was intriguing.

When I moved out on my own, I was already a fermentation enthusiast, making beer, wine, mead, sauerkraut and cheese. It was years before the internet, so I was always looking for sources of information. I new friend of mine was really into books, so we frequented used book sales. I was on the lookout for old time pickling books. We visited the US Government Printing Office, where they sold all sorts of books, maps, and pamphlets. One of the pamphlets, United States Department of Agriculture (USDA) Home and Garden Bulletin Number 92, was on Making Pickles and Relishes at Home. The instructions are very good, and I still refer to them now.

The USDA bulletin has pretty simple instructions for brined or fermented pickles. It calls for proper cleaning of cucumbers, layering the cucumbers in a five-gallon jar or crock with spices and dill, then covering with salt water and weighting down the top with a plate. After three weeks of fermentation, the pickles are removed, the brine is strained and boiled and poured over the pickles in canning jars, then processed to make a shelf-stable product.

The troubleshooting section of the bulletin is excellent. Hollow pickles are due to poorly developed cucumbers keeping cucumbers too long before pickling, too rapid fermentation, or too strong or weak a brine. Soft pickles are due to microbial action due to the salt/acid of the brine, cucumbers exposed to air during the fermentation, scum which forms on the surface when exposed to air getting mixed into the brine (that scum is usually undesirable bacteria or yeast), mold on garlic or spices, failure to completely remove blossoms which contain fungi or yeasts which will cause enzymatic softening of pickles. Dark pickles are due to ground spices, too much spice, overcooking (during the canning process), minerals in water (iron), or use of iron utensils. All of that is great advice.

I have made many batches of fermented pickles and have canned them to preserve, but I have found there is nothing better than eating them right from the crock. When the crock gets near the end, I remove the rest of the pickles and keep them in the fridge. Otherwise, I get them going, start sampling a week in, and then much away until they are gone. They do make pretty darn good fried pickles, but I will save that for another post.

Fermented pickles can be made from spears, slices or chinks, but the best are just whole cucumbers. This starts with planting good pickling types in the garden so that the harvest can be made the same day as the crock is filled. I usually plant 2-3 types of cucumbers that say they are good for pickling. I don’t have any favorite; I just go to the seed store and pick some out. I pick a basket full of 3-5″ cukes, bring them to the kitchen and give them a very good cleaning with water, a cloth, and let them dry. During the washing process, I remove the blossom and spines, and scrape my nail over the blossom spot to make sure it’s gone. I leave the stem in place if there is a stem. I eyeball the number of cucumbers I will need for my crock. If there are extras, I put them in a salad.

I use a 10 liter fermentation crock because a few of these fit nicely on our counter top. I wash and dry the crock even though it was put away clean. I find that residue from prior ferments hangs around and can harbor mold and bacteria, so one more scrub is prudent.

Next step is to make the brine. I use 4 liters of water. I like a 5.3% brine, so I weigh out 53 grams of salt per liter, 212g in this case. Use sea salt or pickling salt. I like Korean sea salt as it is made for kimchi and fermenting…perfect taste. I add a tablespoon of black pepper corns and a tablespoon of dill seed. I like some added acidity, so I put in 10% (400ml) homemade vinegar. I this batch, I used mead vinegar. If you add vinegar and do not have homemade, then use a mild vinegar that you would use in a salad dressing.

I add 6 tablespoons of pickling spice mix. Do yourself a favor and mix your own pickling spice. I use the same blend to boil shrimp, make corned beef or pastrami, or make pickles.

Toast the first four spices in a dry skillet, cool and mix with the rest of the spices. I try to use this up within a month. Store in an airtight container.

Bring the brine to a hard simmer and then allow to cool to room temperature.

Wash about 2 cups of fresh dill and pat dry with a towel.

Pack the cucumbers in the crock layered with dill and garlic. When the crock is full, pour in the brine to cover. Make sure the cucumbers are completely under the brine. If not, either make more brine (just salt and water this time to 5.3% salinity) or remove cucumbers. 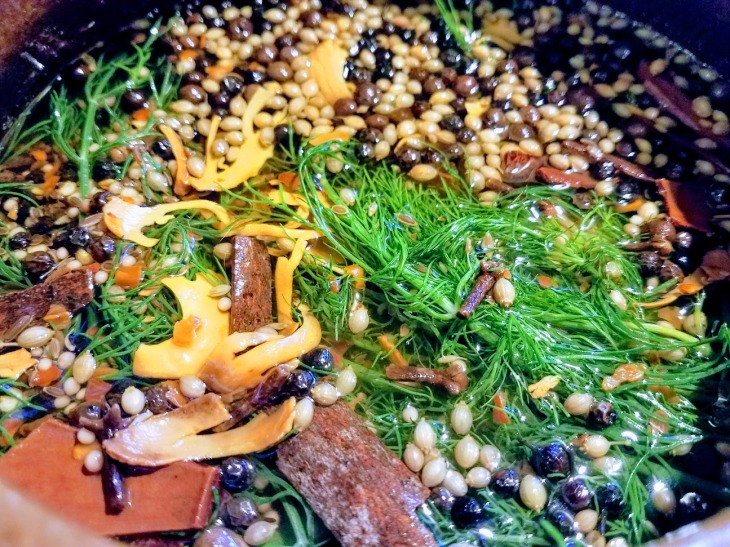 My crock comes with weights to hold items under the brine, but I opt to just fill to the top to exclude air. The crock has a dome lid which fits into a channel around the top which is filled with water. This creates a one-way airlock to allow fermentation gas to be released, but no air to get in.

Open the crock after a week. You can sample a pickle. I find them pretty good at this point, but three weeks is the peak. After three weeks, fermentation is pretty much complete. The pickles can be stored in the crock with the lid on for much longer. They are shelf stable. If you find they are getting soft or quality is degrading, then you may want to take them out of the brine and refrigerate. You can make fresh brine to store them.

You can also can them at any point, too. Just pack the pickles in clean Mason jars, cover with brine and process in a boiling water bath canner for 15 minutes.

Ours have not been making it that long. A crock of summer pickles comes once a year, so we look forward to the special treat and enjoy them right from the crock as long as we can!