There is a clever saying in German: “Alles hat ein Ende nur die Wurst hat zwei.” Everything has an end, only sausage has two. Knowing that bad times cannot last makes us glad for endings. Of course, the same certainty of an end applies to the good things, and we are sad for them to reach closure. So, because sausage is definitely one of the best things in life, does this mean we are twice as unhappy when they are gone?

This post is about a specific type of sausage, Weißwurst. In the United States, many sausages are sold as Weißwürste. Having no other point of reference, believed, as many here do, that this sausage was a pale cousin of the Bratwurst. I was happy in that belief and munched my way through many tasty links.

I think my first experience with a true Bavarian Weißwurst was on an overseas trip where I had a few hours of early morning layover in Munich following a red eye flight from the United States. I decided to get a bite to eat in the airport. Taking a seat in a cafe, the server asked if I was interested in the traditional breakfast. “What is it?” I inquired. She replied that it was two pieces of Weißwurst, a freshly baked pretzel, and a half liter of Hefeweizen beer. Obviously, this was what was for breakfast, and I consumed it with gusto.

The next time I was in Munich, I walked from my hotel to Andechs am Dom for breakfast. Andechs is an excellent Bavarian brewery, and this cafe is near the cathedral and open air market. The table was already set with a basket of fresh pretzels. The server just asked how many pieces of Weißwurst I wanted and took my beer order. Delicious!

As is my way when experiencing such good foods that cannot be procured at home, I was determined to make Weißwurst. I searched for recipes, and most of the recipes I found looked pretty much the same.

Ground part-frozen veal and fat at 7mm. Add seasonings and ice and regrind 3mm. Mix in stand mixer until all is well blended. Mix in milk powder. Stuff in medium hog casings. Twist into 5″ links. Poach in 170F water for 30 minutes. Shock in ice water.

I was quite proud of how these turned out. The nutmeg flavor was a bit too strong, but overall, they were pretty tasty. Not what I recalled from Bavaria, but well above acceptable. I proudly showed my German friends what I had accomplished, and they were horrified! They exclaimed that milk powder and mustard have no place in Weißwurst!!

Adding insult to injury, I browned the sausages in a pan before serving. This must never be done with true Weißwurst. Weißwurst’s cousin Wollwurst is the one which is browned.

Weißwurst is to be made fresh in the morning and eaten right away. It is poached in water and served in a pot with some of the cooking liquid to keep it warm. Bavarians peel the skin from the sausage to eat it, either by sucking out the sausage or by slicing down the side and rolling the sausage from the skin.

Back to the drawing board. I needed a new recipe, but I did learn a few things from my initial attempt. The method of grinding and blending the meat and fat with the crushed ice produced the right texture; that method would be retained. The spicing was a bit high, so I knew the nutmeg needed to be dialed back. I had poached the sausages in my Sous Vide Supreme, an early generation home sous vide machine which does not use a recirculator, but which does hold an accurate temperature. Poaching at a lower temperature, I believed, would improve the texture even more.

As far as recipe adjustments, the milk powder and mustard had to go. Milk powder gives a moisture to the sausage, so I needed to replace that. Seeking true Bavarian methods, I discovered this was done with cooked pork skin, fresh onion, and a small amount of sodium tripolyphosphate (STPP). I have now made this a few times, and feel like I have the recipe and process pretty much locked in. Confident enough to share with my German friends.

The first step was to prepare the pork skin. I have quite a bit of skin from butchering hogs for charcuterie. I sliced off all traces of fat from the skin, cut the pieces of skin into 2 inch squares, and put them in a pot with water. I brought them to a boil, and then simmered for 3 hours until they were very tender. I coarsely chopped them and then cooled in the freezer.

The cubes of veal and pork fat were also partially frozen. I mixed in the cooked skin, and then ground at 6mm. I put the ground meat, fat and skins in the deep freezer. I put the meat grinder parts in the freezer as well. I also put the bowl and blade for my mixer in the freezer. When the meat was developing ice crystals, I removed it and added the remaining ingredients. Then I ground all of this at 3mm, and placed it in the ice cold mixer bowl. Run the mixer until the meat is very sticky and smooth (but still very cold). 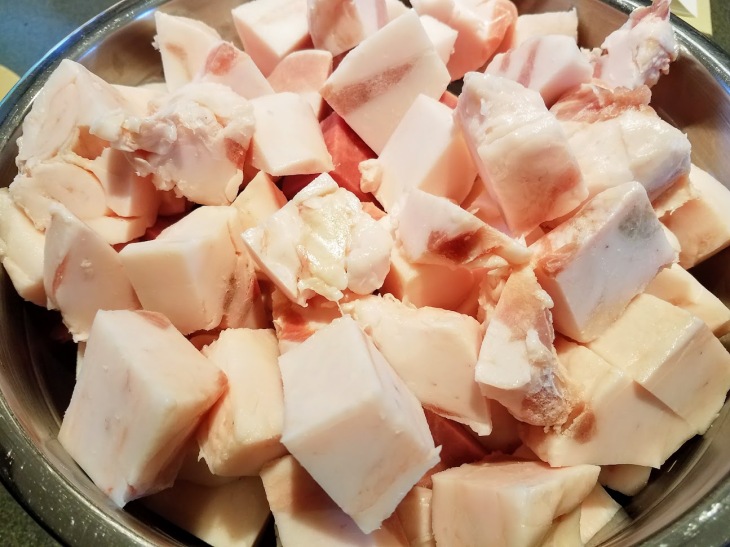 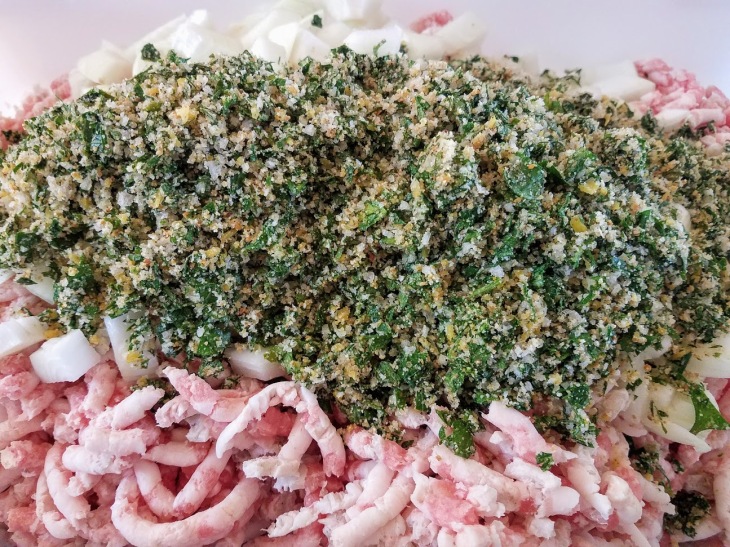 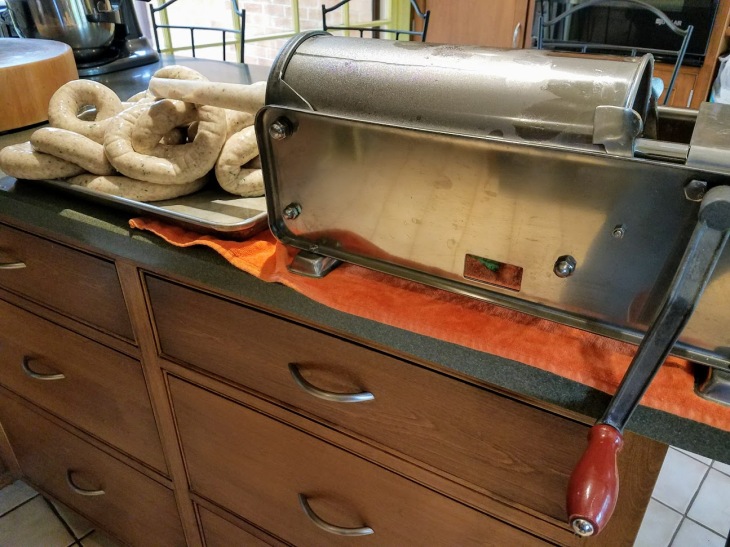 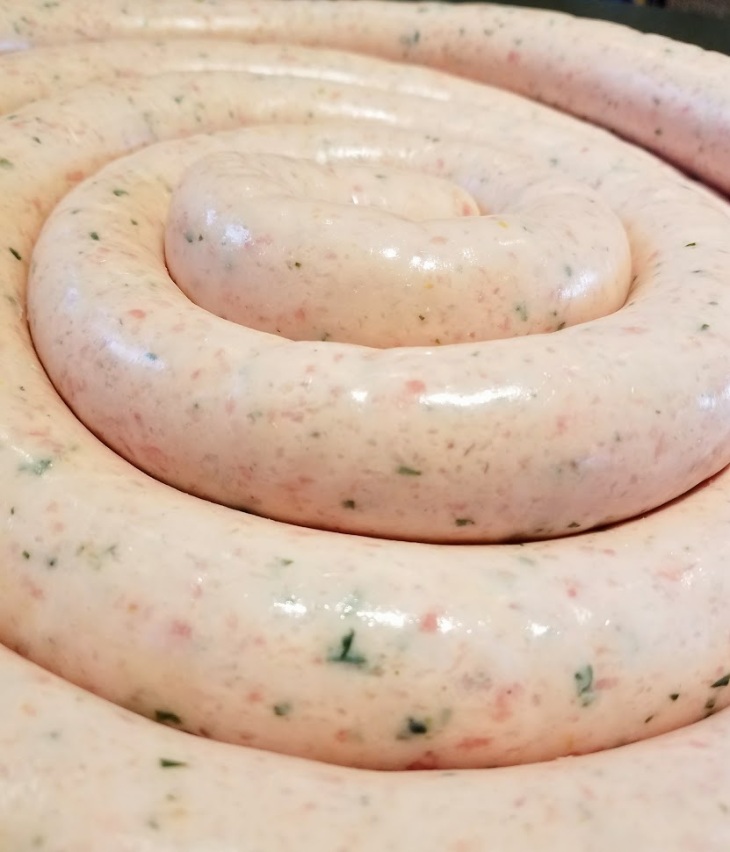 I then used my sausage stuffer to stuff into large hog casings, tied the sausage into links, and poached in the Sous Vide Supreme at 155F for two hours. Remove and shock in an ice bath. 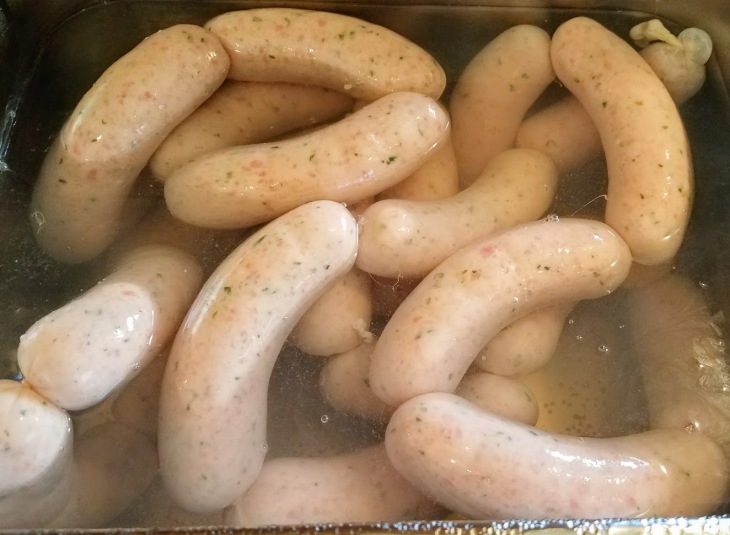 To prepare for eating, I put the sausages in a pot and slowly heat to a very low simmer until the sausages are heated through. Serve with pretzels, Weißwurst mustard (sweet), and a good glass (or more) of Hefeweizen. Or if you buck tradition like me, you can serve with whatever foods you like, and maybe even a glass of Doppelbock. Or, gasp, eat them with the skin!

When you make your own sausages, there never needs to be an end to them.