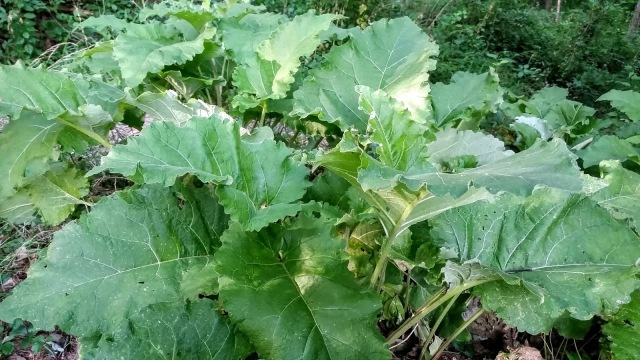 As a gardener, it gives me great satisfaction to be able to do something constructive with weeds (other than composting them into new garden soil). One of those weeds, burdock, has a long, thick, fleshy root which can be turned into a variety of delicious dishes. In fact, all parts of the plant are edible.

We compost all of our weeds, lawn and garden waste, kitchen scraps, spent grains and hops from brewing, etc. There is too much to confine the compost to a bin, so I maintain a sort-of free form pile. The pile moves around a bit as I take rich compost from one side while adding new materials to the other side. The pile gets flipped and turned sometimes to make sure everything decomposes evenly and that weed seeds are exposed to enough heat from decomposition to render them incapable of sprouting when the compost is later put on garden beds.

The pile has become its own ecosystem with worms, bugs, snakes, and even sometimes deer or ground hogs will come and forage. It draws birds to feed on worms and bugs, and it draws foxes who feed on small critters who visit. As the pile has moved around over the years, it has left deep, rich soil in its path. We are on a hill, so rains carry the rich soil nutrients into the area below our property which we call “the meadow” because it features a small stream and chest-high weeds. I’ve also worked to naturalize the area by limiting invasives and planting with serviceberry, sugar maple, and pawpaw trees along with native berries.

Burdock is one of the weeds growing in this area. You can’t miss it because of its huge, lush leaves. One initial plant intruded into my composting area, and I tried to keep it at bay. But it wasn’t hurting anything, so I left it alone. Besides, it was big and impressive to look at, a visible testament to the high quality compost I was making.

I never noticed the burrs too much. But then we got our shaggy dog Bear. He would come in the house covered with burrs. Where did they come from? Well, now that we have had Bear for four years, the burdock has taken control of a fairly wide area. So much that our neighbors asked, “What are you growing back there? It’s huge!” Umm, nothing…it’s weeds.

I had eaten burdock on trips to Korea and Japan, and it’s frequently included with the Banchan dishes served with local Korean meals, so I decided to investigate further.

When fortune delivers plenty, we might as well take advantage of it. Burdock has many great health benefits, too. In fact, it is used medicinally for many common ailments. I understand that all parts of the plant are edible, although I am not sure (yet) how to use the stalks. The leaves, I think, would be great to use in wrapping items to be steamed or grilled. First, I am going to tackle these roots.

I picked up a book on Japanese pickles on one of my business trips to Tokyo. The book has a number of recipes for burdock. The translation is a little rough, so I just used the recipes as a basic guide. The results are really good. I think we may eat our way through this weed patch, and wish for more!

I found the best result is to dig the roots and immediately use them. I had dug a few initial roots just to see how much potential the patch had, and those roots became shriveled and discolored overnight. 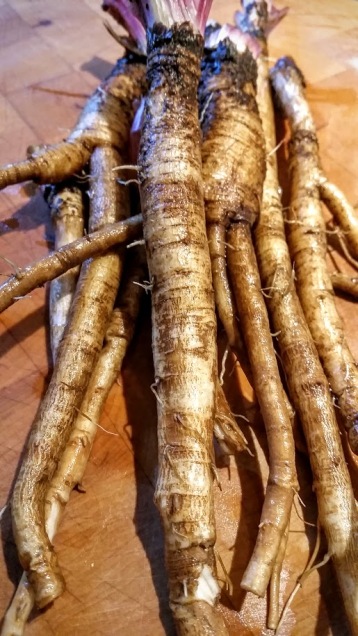 For this recipe, I dug seven plants, each yielding a root about 8-12 inches long, varying in thicknessfrom an inch to perhaps pencil thickness. Cut off the tops and scrub the roots with plenty of fresh water to remove all dirt. I cut the roots into pieces about the size of my index finger and then tossed them into a pot of boiling water to which I had added 2T brown rice vinegar. Cook the roots until they are tender enough to be pierced with a fork, about 20 minutes.

Drain the roots and place them on a cutting board. Pound the roots with a meat tenderizer mallet. Pull the roots into shreds and place in a bowl. 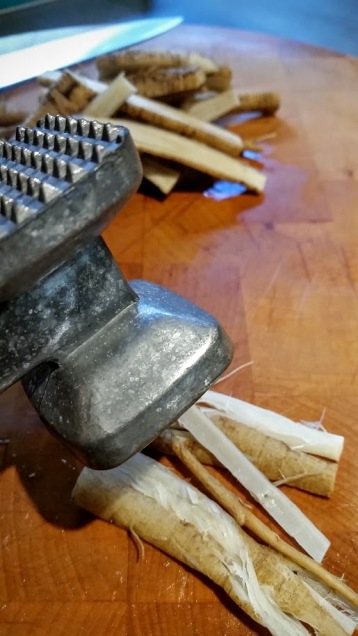 Make a pickling liquid of 2T low sodium soy sauce (use a brand that is naturally fermented), 4T brown rice vinegar, 1/4t salt, 2T raw sugar, 4T roasted sesame seeds which have been toasted in a dry skillet and then mashed into a paste, 1/2t high quality sesame oil. Toss this mixture with the shredded roots.

This pickle is ready to eat right away, but improves after a day in the refrigerator.

This treatment is accented with Korean flavors. I have a number of Korean cookbooks and a similar recipe is found in those.

Again, I started by digging some fresh burdock roots and scrubbed them clean. Slice these roots very thinly on a bias. I should have noted that for both of these pickle recipes I left the skin on the roots. Some recipes I saw called for peeling the roots, but I found the skin adds a nice flavor to each dish (besides eliminating the step of peeling).

The slices of burdock root are again cooked in a pot of simmering water with a bit of vinegar added to prevent the roots from browning.

When the sliced roots are tender (they definitely will still have some crunch), drain and toss them with 4 thinly sliced green onions, 7 minced cloves of garlic, and 1T minced ginger root.

Make a mixture of 2T Gochujang (Korean red pepper paste), 2T low sodium soy sauce (naturally fermented), 1T yellow miso (I use a type which includes dashi), 1T high quality sesame oil, and 1t raw sugar. Blend this mixture in with the other ingredients. Let this sit for an hour or two at room temperature, and it is then ready to eat. Keep uneaten portion in the refrigerator.

Both of these pickles are excellent snacks, or can be served with other small dishes or salads before a meal.

And now for something completely different. I was talking to folks about eating all of this burdock, and got some interesting ideas. Someone mentioned to me that burdock is related to artichoke (it is a type of thistle) and that the flower stalks could be eaten like artichoke. I checked the burdock patch and, sure enough, several of the remaining plants were sending up flower stalks. The stalks look very much like an artichoke stem.

I removed the stalks from several plants, and peeled them. Hint: this was a little tricky. You have to work fast because the stalks will discolor. Cut the peeled stalks into 2 inch pieces.

I already had a pot on the stove simmering with white wine, olive oil, salt, some preserved lemons (you can use fresh lemon if you do not have preserved lemon on hand), 3 cloves of garlic, and a little black pepper. Toss the peeled stalks into the pot and simmer until they are tender.

The result is delicious! Some pieces were a bit woody, but you can chew off the soft core just like the flesh from leaves of an artichoke.

I can hardly wait for the burdock patch to come back next year! 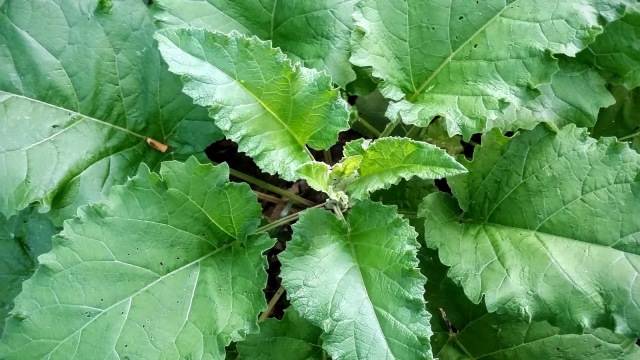