30+ years ago I went to K-mart to get some parts for my broken down car. They had a closeout table in the garden aisle (which was on the way to the parts counter which I knew all too well). I bought a dried up piece of horseradish for ten cents. It was about half the size of a pencil, and looked very much non-viable.

I asked my dad if I could plant it in his garden, and he let me put it in a shaded corner where nothing else would grow. It took off, like horseradish does. Within 3 years, there was more horseradish than we could use. My dad started complaining about it, but it was the only thing that would grow there. He would get it in his compost or caught in the tiller tines and it would pop up somewhere else.

Time went by, as it does, and my dad’s health failed. He was in hospice this Spring, and I was with him every possible day. He asked me to look after his garden. I noticed he had dumped a huge load of dirt on top of the horseradish, trying to kill it off. I mentioned it to him, and he cracked a smile. Yes, he had been trying to kill it off. A few days went by and I let him know the horseradish was winning. It had pushed up through the dirt. He first looked defeated, but then he smiled again.My dad passed away, and I did as much with his garden as I could, but I needed to get home (2-1/2 hours away). I weeded and planted things he had asked me to. His garden is huge, so some of it is fallow. Neighbors came to help, and one of my uncles weed whacked the horseradish. I dug up 5 nice roots and transplanted them to my garden…where nothing else would grow. 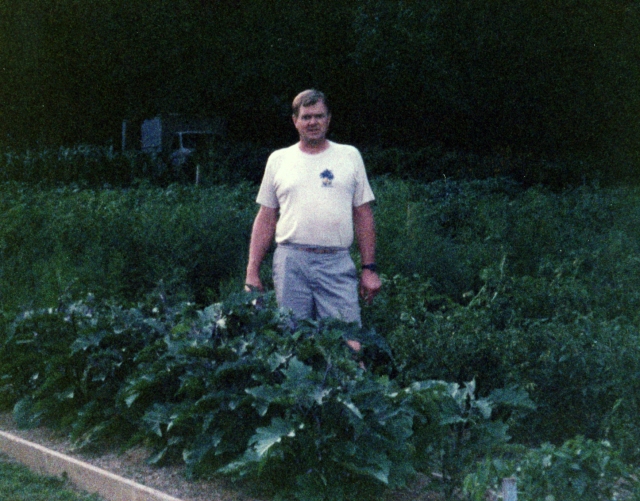