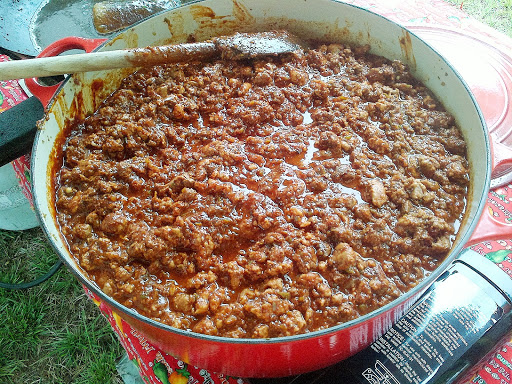 Let there be no debate:  Chili is all about meat and peppers. If you do not agree, then just stop reading now.   For this year’s BURP Chili Cookoff I wanted to make a chili that boldly brought these two main flavors together with a supporting complement of freshness, rounded heat, smoke flavors, just the right texture, and a deep red hue.  I typically only make my competition chili once a year, just for BURP, so I put a lot of work in to get it the way I like it.  My recipe roughly follows the same recipe and process I have been using since 1998.  Of course, every year there are a few variations and refinements.  Folks who know me understand that I don’t keep culinary secrets.  I love to share techniques and discoveries with others so they can participate in the adventure.

There are a few things I do with my chili that make it different, and all of these have been published in my chili recipes of the past.  There is nothing easy or cheap here; it’s a special dish for sure and it only comes once a year for the BURP Chili Cook-off.  The chili I make for home use is much simpler and easier for sure.  That’s probably enough of the backstory for now, so you probably are looking for the recipe.  Here goes!
I start with a tomato-less sofrito.  This gives a bright, fresh vegetable character to the finished chili.
3 Green bell peppers, seeds and pith removed, minced very fine
5 White onions, minced very fine, rinsed with ice water
20 large cloves garlic, minced very fine
20 fresh Jalapenos, seeds and ribs removed, minced very fine
Once minced, I let these veg all drain in a fine mesh colander, then seal in a container.  It’s about 1 gallon of minced vegetables.  You want them minced fine enough that there are not notable pieces floating around in the chili pot.  Meat is the star of this show. 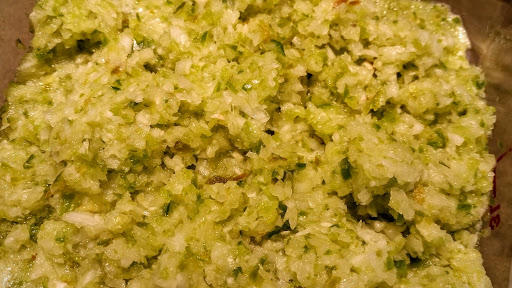 Heat several cast iron skillets on medium heat, and then toast the pods in the pans for about 15 seconds or so per side.  I flip them when they give off a good aroma.  Do not burn them!  Cut the tops off the chilies to remove the stem and shake out any loose seeds.  Place all of the pods into a large bowl.  Cover with hot water, and weigh them down with a plate.  Work in batches filling a blender about ½ full of peppers and a cup or two of the soaking liquid (taste the liquid and if it is bitter, just use water or stock instead.  Puree the peppers.  Pour into a fine mesh strainer and press through with a rubber spatula.  This will produce about 8-10 cups of chile paste about the consistency of loose pancake batter. 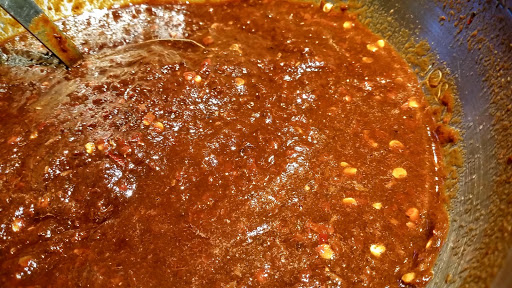 Time to make some Chili!
I set up two burners.  A butane burner holds my large Le Creuset stew pot, and my 35K BTU Cajun Cadillac burner holds a well-seasoned wok.  I melt about half a cup of lard (good lard or bacon drippings….not the pure white supermarket stuff) in the Le Creuset pot.  Once it is hot, add all of the minced vegetables.  Add a few teaspoons of smoked sea salt to let it give up moisture, and stir.  Check on this frequently to make sure it does not scorch.  While the moisture is cooking off of the veg, fire up the wok as hot as possible.  Working in batches, sear the meat on all sites.  Season a bit with smoked salt and fresh ground black pepper.  You should still see some pink, and some black spots are OK, too, but not burned and not boiled either.  If it gives off juice and boils, then you added too much to the wok at once.  You want a good crispy sear.  Reserve the seared meat to the side and keep working.

Once the liquid is mostly cooked off of the vegetables, then it is time to add in the beer.  I used my wine barrel aged Flanders Brown Ale to get a fruity, wine like flavor (and low hops).  Belgian ales work well here.  Continue cooking the veg until the beer is evaporated off.  When it’s almost gone, add the dry spices to toast them a bit with the veg.  I added 2T of dried Mexican oregano, 1 T of ground cumin, 1T ground, toasted coriander seed, 2T fresh black pepper, ¼ cup ground New Mexico chile powder, ¼ cup smoked sweet Spanish paprika, and a big pinch of ground habanero powder.  As soon as there are signs of caramelization, add in the meat and stir to mix it up.  Add two quarts of rich stock. This year I used stock made from the carcasses of deep fried turkeys and another stock made from an oven roasted skin-on pork roast (dinner the night before the cookoff).  Once that is all blended in, I added 2 quarts of the homemade chile paste.
Then just to take it to another level, I brought a smoked brisket point cut.  I had cooked a few briskets the week before, so I cooked a bit extra to have a point reserved for my chili.  They were cooked for 15 hours over a low pecan log fire.  I cut the point in ¼ inch cubes.  It made about 3-4 cups.  I handed the burnt ends around to the other chili cooks.  Brisket in the chili adds smoke flavor, a depth to the meat flavor, texture that is different from the other meats, and a yummy look.  Looking into a bowl of chili and seeing a glistening piece of brisket bark and smoke ring covered with peppery goodness, who wouldn’t want that?

Bring the pot to a good boil and then immediately drop to a low simmer.  Taste for salt and seasoning.  Add more as needed.  I usually add more chili powder at this point to adjust the color.
Now there is nothing to do but wait, talk with friends, and sample some beers.  As it gets close to tasting time, I keep a close eye on the pot.  I want the solid to liquid ratio just right.  Not too wet, like soup.  I want there to be some broth but the pot has to have a certain sheen.  I also taste a few pieces of meat to make sure the texture is right.  I stir around and look for any pieces of gristle or blood vessels that were missed.  No one wants that in their sample.  I do a final adjustment of the seasoning, add some Rocoto chili paste (2-3T) to brighten the fresh pepper flavor, and another cup or two of the homemade chile paste.  I did bring some beans (I love beans), but made a game time decision not to use them as the flavor I wanted was there.  The last thing, I taste a full sample to make sure it works and I like it.
I don my late best frind Charlie’s cool chili shirt.  Ready to serve, and I brought some homemade corn tortilla chips with sea salt and some finely grated cold smoked Cotija cheese for garnishes.  I also brought homemade (and homegrown) tomatillo salsa as an acidic palate cleanser, and assorted homemade/homegrown hot sauces for those who dare.

It is my great pleasure to serve some tasty chili.  I love to see folks savor the result of all the effort, and hearing the sounds of satisfaction. 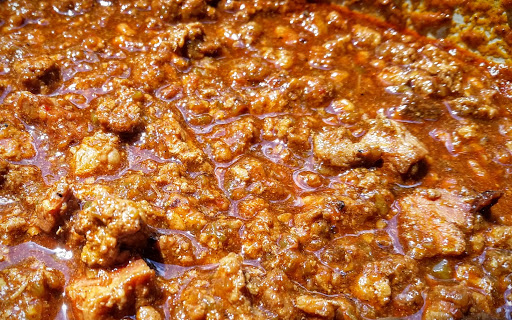