In New York City, if you take the 7 train through Queens to the end of the line in Flushing, you will find yourself immersed in a great China town. The smells from the many restaurants, food courts, and markets will draw you in to another world. Here it’s possible to sample foods from every province in a matter of hours. Of course, I am headed right to Sichuan. That addictive, mouth-numbing heat is what I crave.

Deciding what things to eat can be a challenge with so many options, but fortunately it’s very inexpensive, so there are few poor choices. Many food stalls display condiments out front. The giant vats of dark chili oil grab my attention. They look like they have been added to many times over a long period; as the pot is consumed by diners, more stuff is added. There’s magic in those pots. I need this!

To say we have a lot of peppers in our house is quite an understatement. Each pepper has its place, and they all get used. Nothing goes to waste. Perhaps the largest source of potential pepper waste comes from the solids strained out when I make may large annual batch of fermented hot sauce. When I first started making this sauce over 15 years ago, I would strain the heck out of the fermented mash. I’d run it through the spiral strainer until there was nothing left but seeds and pale chile skins. That spent mass went in the compost pile, or I would add it to bird seed to give marauding squirrels a surprise. Later, it dawned on me that I could strain more lightly and have something left that was very, very usable in my kitchen.

Those leftovers are, after all, chilies, garlic, and salt. So, after the initial straining step (maybe two passes through the strainer if the first pass did not seem efficient), and spread the mash in a tray and put it in the dehydrator. Turns out, this stuff is pretty good on its own. I used it instead of red pepper flakes. I put it in an emptied Costco red pepper flakes shaker. When friends came for pizza and used my peppers, they asked if these delicious peppers came from Costco. Um, no.

Next, I improved them even more by cold smoking half of the mash to dry it, and mixed the smoked and un-smoked peppers. This was a revelation! These peppers were good on everything. I’d give away small shakers of them to friends and family. Everyone would say, “did you try this with those peppers?”, “did you try that?” Yes and yes.

But still, I end up with a lot of dried fermented pepper mash. I needed another use for them. Eureka! The Sichuan chili oil!

OK, I had all the dried peppers I was going to need, but what else to round out the flavor of my oil? How to make the numbing heat I craved? What about some texture?

For the flavor, I wanted ginger, garlic, and cinnamon for sure. Bay leaves give a great flavor in oil, and I have a bay laurel tree with fresh leaves. Sesame seeds always go well in these types of things. Finally, fennel seeds, cumin seeds, and star anise to subtly spice the mixture with some aroma; can’t just have “in your face” chile heat. I tried cloves in a batch, but they did not make the cut. For umami, I added some finely chopped dried wild mushrooms. I dry some of the less desirable edibles for just this purpose of infusing a mysterious umami. In this case I used Suillus americanus, which grows in North America and China. It’s sometimes known as the “chicken fat mushroom” and has a mycorrhizal association with eastern white pine. We get quite a few of them here. Perfect for making into savory mushroom dust. I also added MSG; it’s ok, it’s harmless regardless of that you have heard. Many of the foods you eat: cheeses, vegetables, and mushrooms, all contain naturally occurring MSG.

Next, I struck gold in the spice aisles (yes, aisles!) of a big Chinese market located in a fantastic local Vietnamese shopping center (I can find any excuse to go here—man, I could go for a good Bahn Mi). I got several types of Sichuan pepper to try, along with two relatives of cardamom that I found were used in Sichuan cooking. These look like large brown and white cardamom pods, and are labeled as “amomum tsao-ko” and “amomun fruit,” respectively. Sichuan pepper is the fruit of the prickly ash tree, and I have found that there are several varieties, best to buy small amounts and try them out to find the ones that are best. Between ma po tofu and homemade five spice powder, we use a lot of Sichuan pepper here. I tried various combinations of the Sichuan pepper, tsaoko, and amomum to get the best floral, herbal, and almost menthol-like character from these ingredients. This was the numbing element. 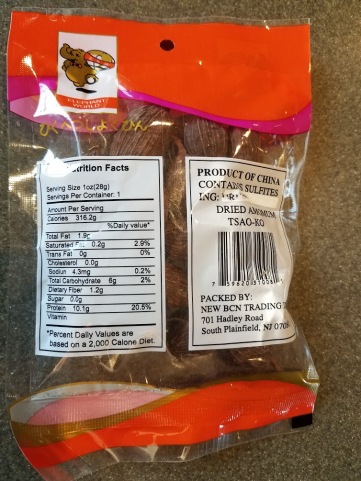 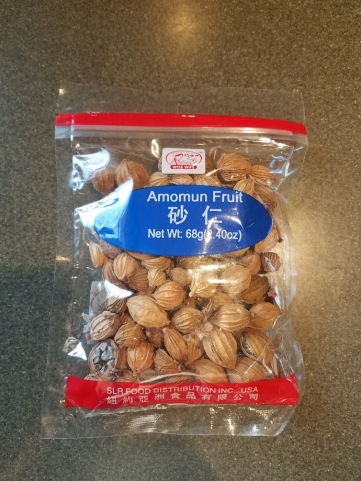 I liked how some of the China town versions had peanuts in them for an added crunch. Sometimes you just spoon off some of the oil to use, but other times, you want that crunch. Toasting the peanuts in the oil, and frying the garlic into golden chips also adds crunch. Shallots can also be pan fried to add still more crunch. I knew my chilies were going to be crunchy as well; when the mash is dried, it tends to clump and holds a bit of crunch, too.

If you don’t have the fermented pepper mash to use in this, you can substitute other toasted, dried chilies ground in a blender or food processor, but you really ought to give the fermented hot sauce a try if you like hot, spicy foods.

Crush the dried pepper solids until they are in fairly small pieces. If you want them smaller, then you can put the solids in a food processor and pulse them a few times with the blade. Place the peppers, mushroom powder. ground Sichuan pepper, sesame seeds, peanuts, and MSG in a large heatproof bowl.

Heat half the oil to the smoking point, then pour over the ingredients in the bowl.

Heat the second half of the oil over medium heat. Fry the shallots until they are golden brown. Remove from oil with a fine mesh spider and place on a paper towel line dish to cool. Sprinkle lightly with salt. They will get crisp as they cool. Repeat with the garlic. once they are cool and crisp, add them to the bowl.

Add the ginger, bay leaves, star anise, tsaoko, amomum, whole Sichuan pepper, cumin, fennel, and cinnamon to the hot oil and reduce heat to low. When the spices become aromatic, pour this oil through a strainer into the bowl containing the remaining items. Mix well. Let this sit at room temperature until it is cool.

I like this condiment as is, but you can add more salt or sugar to adjust to your taste. I keep a small jar in the cupboard ready for use, and the rest is in a larger jar in the fridge.

Hint: Don’t wait for the jar to go empty. When the big jar is about 1/2 to 1/4 full, make a new batch, adding the rest of the previous batch to the bowl. There’s a lot of magic in there after a few refreshes of the pot.

Here’s a few serving suggestions, but you may end up like my wife and put this on everything, including your morning yogurt!