Search
Holiday entertainment usually involves dips to go with crackers or rounds of freshly baked sourdough baguette.  I’ve already posted a recipe for the Smoked Salmon and Cheese Dip shown below, and now here’s a few more that you can whip up in a hurry, but showcase some homemade flair. 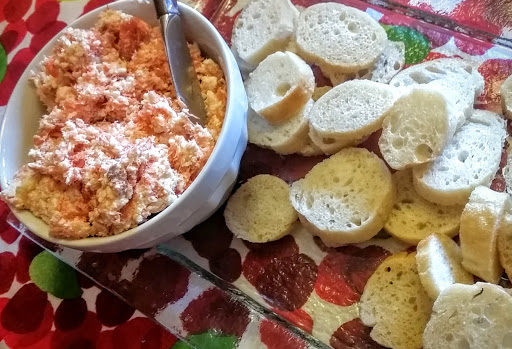 This first one makes me laugh every time I make it because someone inevitably will ask how it’s made.  Well, it’s Bleu Cheese Dip.  It’s a tradition with celery sticks to go with spicy wings.  It’s also great with potato chips.  When someone comments that it is so good, and how did I make it.  I tell them, “it’s very complicated.”  It’s not.  It is high quality bleu cheese (I really like Maytag, if you can find it) crumbled into a bowl and then some sour cream is folded in.  That’s it.  The trick is to use great cheese and to leave some of the cheese in bite size pieces so folks get an occasional nugget.  Done.  That was easy.

The next one is Sour Cream and Onion Dip.  Here, you need to create some layers of flavor that integrate in the dip.  I do this by using a variety of caramelized Alliums (members of the onion/garlic family), some spices, deglazing, and finishing with fresh Spring onions.

Dice a yellow onion, two smallish red onions, and two shallots.  Cook them over medium heat with 2T unsalted butter and a touch of salt until all of their liquid is evaporated and the onions are well caramelized.  If you’ve ever made French onion soup, the technique is similar. 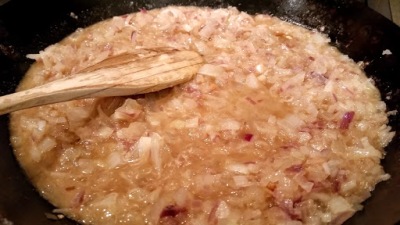 When the liquid is cooked off and the onions start to brown just a bit, add 1T granulated onion, 1T granulated garlic, ½ t white pepper, and ½ t ground mustard.  Add ½ cup smoked pork stock (you may also use a different stock, or dark malty beer or liquor for this … I have used brandy or grappa).  Stir the liquid into the onion mixture and continue cooking until the liquid is all evaporated again.  Remove the mixture from the pan and place in a bowl to cool.

When the mixture is cool, fold it into about two cups of sour cream.  Finish by folding in six sliced green onions, both the white and green parts.  This makes about a quart of dip.

I have a fantastic patch of Spring onions in my garden.  For years I have purchased a bag of Spring onion sets and planted them in the Spring, of course.  They are very inexpensive and easy to grow.  I also sprinkle a pack of bunching onion seeds into the patch.  The problem had been that these onions are so good, we eat them all and then I need to restart the following year.  I finally got to the point where I was growing more than we were eating, and the onions take hold.  They multiply in the Spring and Fall.  Each onion divides into 3-4 new onions, making plenty to use and leave some to sustain the patch.  It is so great to have a patch like this to pull onions from any time of year. 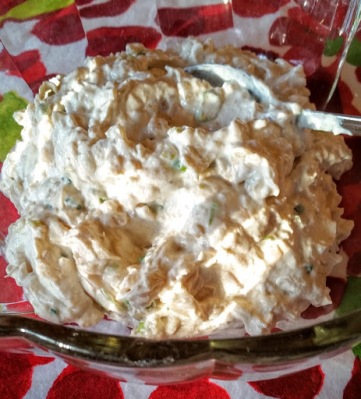 The third dip is Dried Beef and Horseradish Cheese Dip.  The horseradish is the star of this one.  Horseradish is a food that inspires a rush of endorphin that gives you an instantaneous nose-clearing, eye-tearing burst which quickly fades and draws you back in for another bite.  My love of horseradish started with zesty cocktail sauce for shrimp cocktail.

Unlike the Spring onions, maintaining a horseradish patch is not subject to over-harvesting.  Many years ago I owned a Fiat which required constant repair.  One source of parts was the local Kmart.  On a trip to Kmart, I happened to walk by the garden counter and saw a display of closeout items.  I selected a horseradish root for about $.10.  I mean, how can you go wrong for 10 cents?  I brought it home and asked my dad if I could plant it in his garden.  He sent me to a shaded corner where nothing grew.  Thirty years later and that shriveled pencil-sized piece of horseradish root has grown into a patch which could supply a small town with horseradish.

For this dip, use a piece of horseradish root about 1-2 inches in diameter and 6 inches long.  If you like it zippier, then use two roots.  I use two roots.  Wash the roots and peel them.  A food processor is the best way to prepare horseradish.  Beware that it may drive you out of the house, so you may even want to prepare it outdoors.  First, I use the fine grating attachment of the food processor to shred the roots into small threads.  While this looks like cheese, resist the urge to use it in an evil prank.  Two roots will make about 3 cups of shredded horseradish.  Change the blade to the normal food processor chopping blade.  Pulse the shredded horseradish to pulverize it.  Do not stick your nose in the bowl and inhale.

Add two packages of chipped dried beef to the food processor bowl.  Pulse the horseradish and beef a few times to break up the beef.  Sometimes I add a raw shallot in here, too.  It makes a nice onion-y accent.  You want some decent sized flakes of beef in the dip, so be careful not to puree the mixture.

Empty the food processor bowl into a large bowl and fold in two cups of homemade lactic cheese or soft cream cheese.  If the dip is not soft enough to dip with a cracker, add a little sour cream (1/2 cup) to loosen the texture.  If the cheese is already tart, you may use good mayonnaise instead of the sour cream.

This dip is great with chips, crackers, or round slices of baguette, but it is also very good with vegetables or pieces of cheese (Longhorn or Colby) or slices of summer sausage or ring bologna. 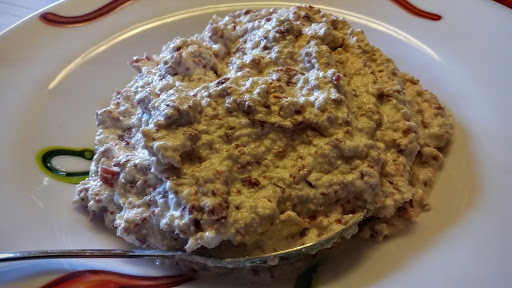