I’d been thinking about a cassoulet for some time now; maybe I never stopped thinking about it.  This could be the best thing that I make; it’s certainly up there on the list.

Now the weather has started to cool, and most summer produce is reserved to the canning pantry and freezer.  One notable exception is a row of Tarbais beans, pods hanging fat after a Summer of being nurtured and surviving the deer eating off all of the lower leaves. The past few years, I have grown these beans with great anticipation of what was to come. My thoughts again turned to when to make a cassoulet.  I had the key ingredients: a bowl full of freshly shelled Tarbais beans, homemade bacon, sausage and duck confit, and rich, gelatinous turkey stock.

The fresh beans turn this into a dish that can be made on the spur of a moment, and they are the star of this dish. It is night and day. If you love cassoulet, I recommend finding a spot to plant these beans. Here’s where to buy the seeds.

When using dried beans, you have to pre-plan and soak the beans overnight ahead of time. It also greatly increases the cooking time. If you are using dried beans for this, soak them in lightly salted water the night before, and then increase the stove top and oven cooking times accordingly to make sure the beans are tender.

Lately I have been spending most weekend days camping, hunting, watching my son play baseball, working in the yard or brewing beer (Fall is my normal time to brew several batches of beer for the holidays and Winter months). Busy days sometimes lead to rushed dinners, and normally cassoulet is not a dish to make in a hurry. I have discovered that having meats, stock, and fresh beans on hand allows this elegant dish to be made in a greatly reduced time period. Yes, it still takes two and a half to three hours, but the alternative is an all day affair.

I made garlicky fresh kielbasa (see the post link) specifically for this dish. Loads of garlic benefits the richness. We always have hearty, gelatinous stocks on hand, along with duck confit and bacon. I had already gotten my meats out of the freezer, and they were thawed.  I started with two packages of my sous vide duck confit.  I have been making duck confit in the sous vide cooker because it is so easy and once done, the vacuum sealed packages can go right in the freezer for when I need them.  Each package has two leg quarters and some duck fat.  It’s perfect for a batch of rillettes.  Each serving needs a piece of duck, so two packages it is!

The duck fat is solid in the pouch.  There is about 3-4T in each pouch, so perfect for what I needed.  I separated the fat and tossed it into my enameled cast iron casserole.  I used an oblong casserole so the dish would be deep and offer good surface area for the crust, which is one of the keys for cassoulet.  I melted the duck fat over medium heat.

Next, I had about ½ pound piece of homemade bacon.  I cut this into slabs about ½ inch thick, and then cut those slabs about ¾ long.  Then put them in the heated duck fat to get crispy on all sides.

Next was the garlicky fresh kielbasa.  I cut about one pound of sausage into 1-2″ pieces.  They followed the bacon in the duck fat to brown.  As the meats browned, they were taken from the pan and reserved on a large platter. 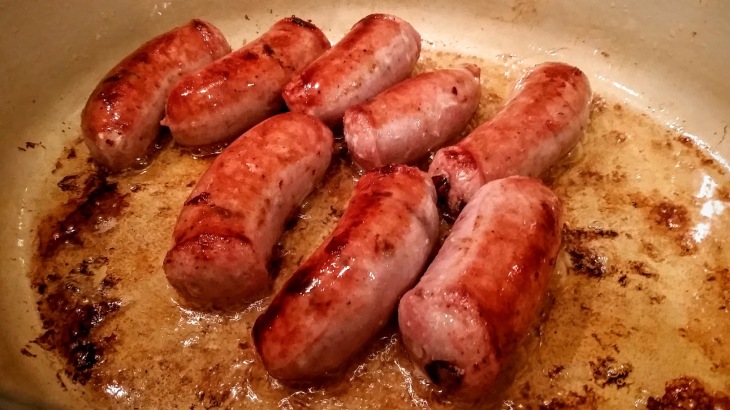 Last, but not least, the duck confit.  All crisped and brown on the surface.

I cut a large onion into quarters and put it in the pan.  While it was cooking, I used a wooden spoon to scrape the fond from the pan and enrich the juice.  As soon as the onion was soft, into the pot went a large carrot cut in two inch chunks, two ribs of celery cut in two inch piecces, two bulbs of rocambole hard neck garlic (unpeeled) from my garden, 4 bay leaves, 6 whole cloves, a small bunch of parsley stalks, three cups of fresh Tarbais beans, and a quart of homemade turkey stock.

When I make turkey stock, I usually let the stock simmer for at least 24 hours.  This makes it very gelatinous.  In the past, I added gelatin to the pot, but I have since found it is not needed.

I brought the pot to a boil, gave it a quick stir, and then reduced the heat to a low simmer.  Let it simmer for 10 minutes until the beans are al dente.

While the pot was simmering, I set the convection oven to 275F convection roast mode.

I also took 4 slices of sourdough bread and ran it in the food processor to turn to fresh bread crumbs.

At the end of the simmer, I checked the beans to make sure they were ready.  They were.  I tasted the broth; it was a little on the salty side, but that is fine because the beans will absorb a lot of salt flavor and mellow it out.

I arranged the meats in the pan.  Put the uncovered pot in the oven, and set the timer for 30 minutes.  After 30 minutes, a crust was beginning to form, and the stock was reducing nicely.  I stirred in the crust and put it back in the oven for another 30 minutes.

Every 30 minutes (give or take) for the next three hours I checked on the pot, stirred in the crust, made sure the duck and chicken pieces were on top to remain crisp, added a dose of bread crumbs, and returned the pot to the oven.

After an hour, the crust was golden brown.  I turned the oven up to 375F convection roast mode. I carefully stirred one more time, added half of the bread crumbs, and put back in the oven for a 30 minutes. Some folks say cassoulet does not need the bread crumbs, and I can see that; however, I like to add them because they wick the broth and cause a nice even reduction and crust formation. 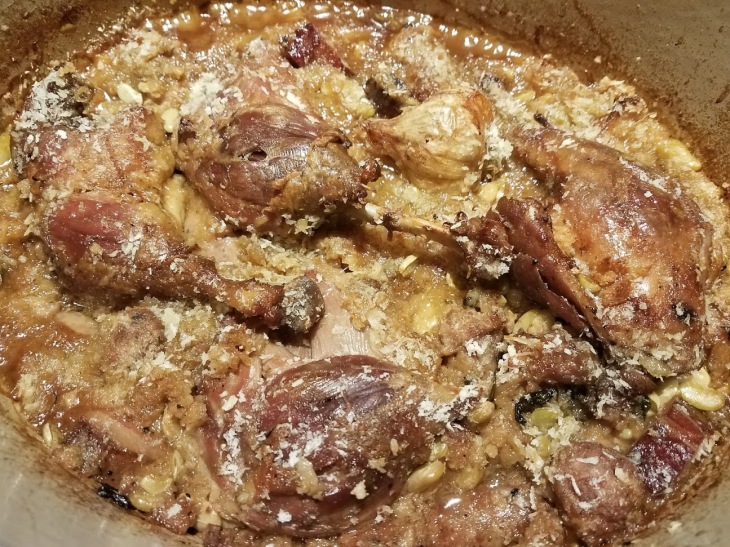 After the time elapsed, I checked on the cassoulet and added the remaining bread crumbs to allow one final crust formation. Back in for one last 30 minute session (total of four 30-minute intervals in the oven, if you’re counting). Done!

So, all that was left was to show off the finished cassoulet and scoop a hearty portion into each person’s dish making sure to have some of each meat and some of that roasted garlic in each dish. 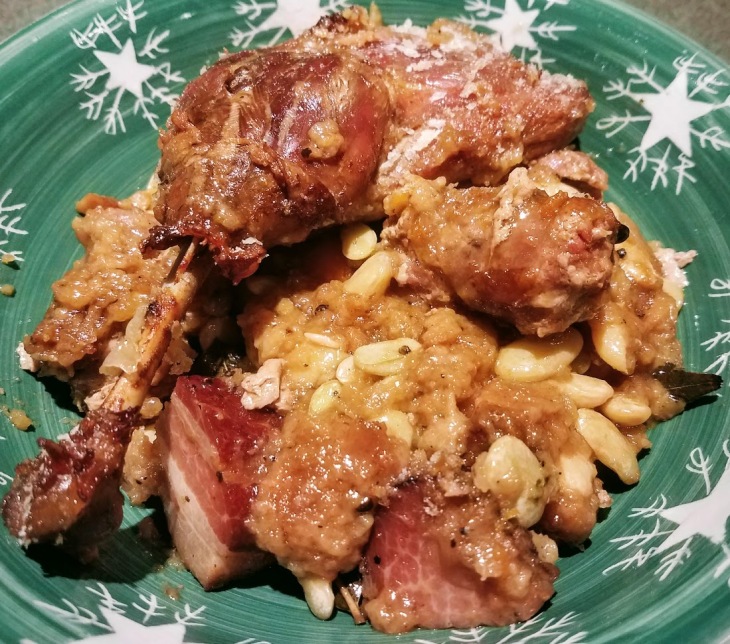 As always when eating cassoulet, most of the dinner conversation was about when we were having the next cassoulet.