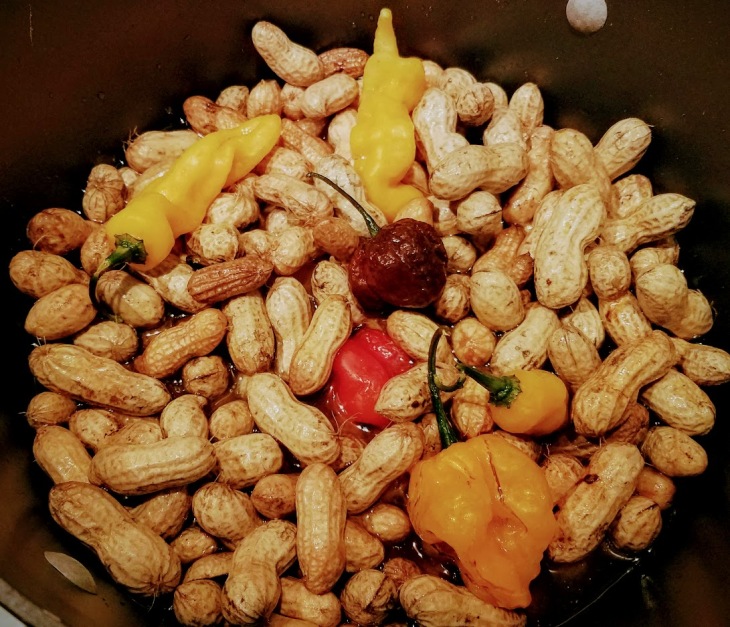 Why in the world would anyone boil peanuts?  Freshly roasted peanuts are perfectly good, so why go and make them all wet and soggy? These are the thoughts that cross many a Northerner’s mind when they encounter or even hear of the nonsense of boiling peanuts.

Being a Pennsylvania boy, I was in this group of skeptics. But on the other hand, I have a lot of friends who know what’s good, and I am always one to give something a try before I strike it off the list of “good things.”

My introduction to boiled peanuts came from my good friend Kinney who lives in the mountains of North Carolina. I have known him for a very long time, and, for the most part, know him to be a wise man. (Let’s just say if he offers you some peach brandy and you don’t have a day to recover, you may want to pass!)

Kinney is a man of the South. He traveled the region (and the world) playing basketball. He told me the wonders of boiled peanuts, and laughed at the uninitiated Northerners on his bus who pronounced the peanuts “wet”! On a visit to Kinney’s mountain abode many years ago, he treated us to smoked trout, the cheesiest grits I have ever eaten, and a big pot of boiled peanuts. Man, it was all good, but those peanuts were the best thing ever!

He told me the secret was in the recipe. Very easy to remember because every item is half the number of the prior: 2 pounds peanuts, 1 gallon water, 1/2 cup salt, 1/4 cup spices of your choosing. Put it all in a pot, bring to a boil, turn off the heat and let it sit for 4-8 hours, and then boil for 20 minutes. Eat them as soon as they are cooled down enough to munch on. 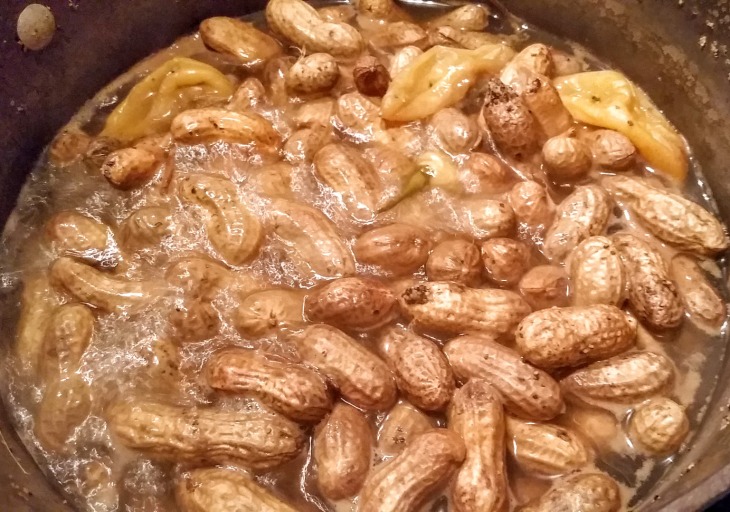 I was hooked! I’ve made many, many batches of these over the years. When I explain Kinney’s recipe to folks, many who know of boiled peanuts scoff. You’re using the wrong peanuts, you don’t add spices — only salt, blah, blah, blah. But then once they try them, if they are lucky enough for me to share with them, then they are in the know.

Quite a few times I have put out a bowl of boiled peanuts to munch on while guests are waiting on some low and slow barbecue, and I have to keep warning them not to fill up on peanuts. Of course everyone knows there’s always room for barbecue.

One of the big divisions in boiled peanut fans is raw peanuts versus green peanuts. What is the difference? I’ll bet most of the folks who make this claim don’t themselves know the difference.

Peanuts are a legume, not a true nut. They grow underground. The seed peanuts are planted in a row where they sprout into a little shrub-like bush, very similar to a non-climbing bean or pea bush. When the plants mature in late summer, they produce beautiful little flowers. Then the stem sprouts pegs which reach to the ground. Wherever a peg hits the ground, a peanut is formed under the top of the soil.

Like other legumes, peanuts will continue to bear fruit continuously until the plant weakens in Fall. The nuts are harvested by carefully digging them up and then allowing them to cure to dry out in order to be ready to eat.

Inspection of the peanuts shows some are darker and more mature than others. Inside the shell is a fuzzy pith which will dry as the peanuts cure. The darker and more fully developed peanuts are the ones that would be roasted or dried and sold as roasted peanuts. The others are the green peanuts, and they are the nuts most suitable for boiling. 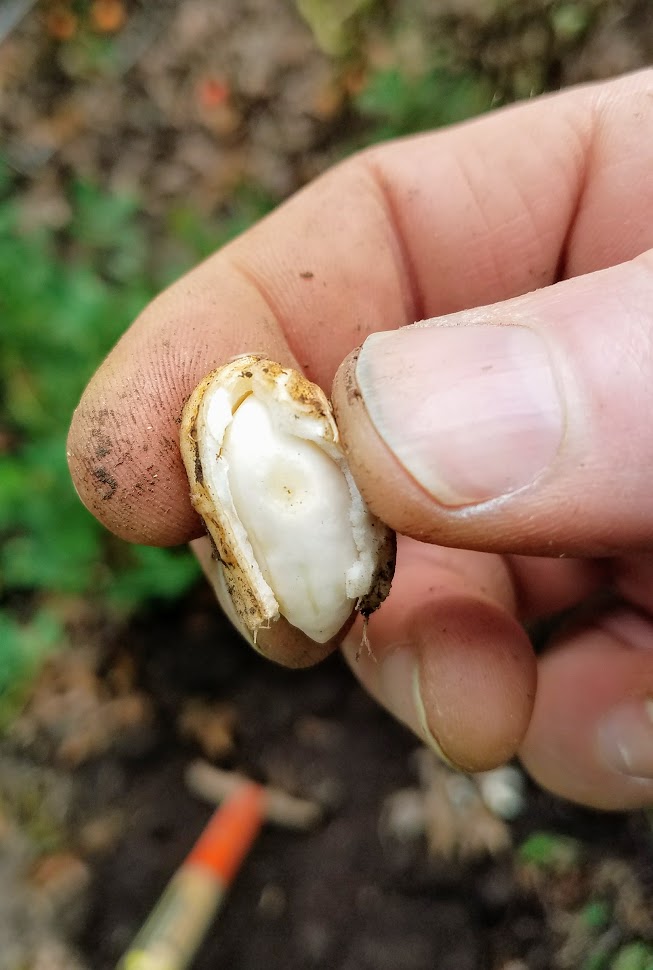 Don’t believe anyone who tells you that you cannot use raw peanuts to make boiled peanuts, that only green peanuts can be used for boiling, or that the process here is only good for raw peanuts. Wrong!

Raw peanuts are widely available in supermarkets or can be purchased on line. For years, our local feed store was selling 25 pound bags of raw peanuts for squirrel food. When I stopped in for dog food, a bag of those nuts went in my cart.

The difference in how raw versus green peanuts taste is a distinct, however. Raw peanuts will be firmer and have a bit of a crunch; they taste more like roasted peanuts, but moist and infused with the salt and spices. Very good. Green peanuts are softer. I would compare them to the texture of roasted chestnuts, with a clean, earthy taste. And, of course, infused with spices and salty goodness.

For my spices, I like to use lemon pepper, Old Bay, barbecue spice, etc. You get the idea. Whatever you like. To boost the flavor, I also like to add garlic (fresh, roasted, or confit) and a few hot peppers to the boil. If you prefer hot pepper flavor but can’t take the heat, then just take the peppers out after the first boil. 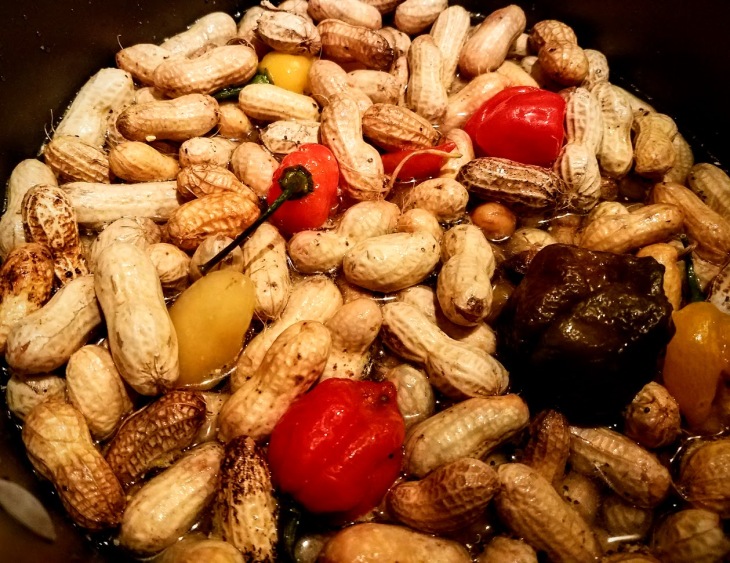 To eat the peanuts, crack one end of the nut with your front teeth and suck out the juice. Then rip the shell off and eat the nuts. Delicious. Thanks Kinney!